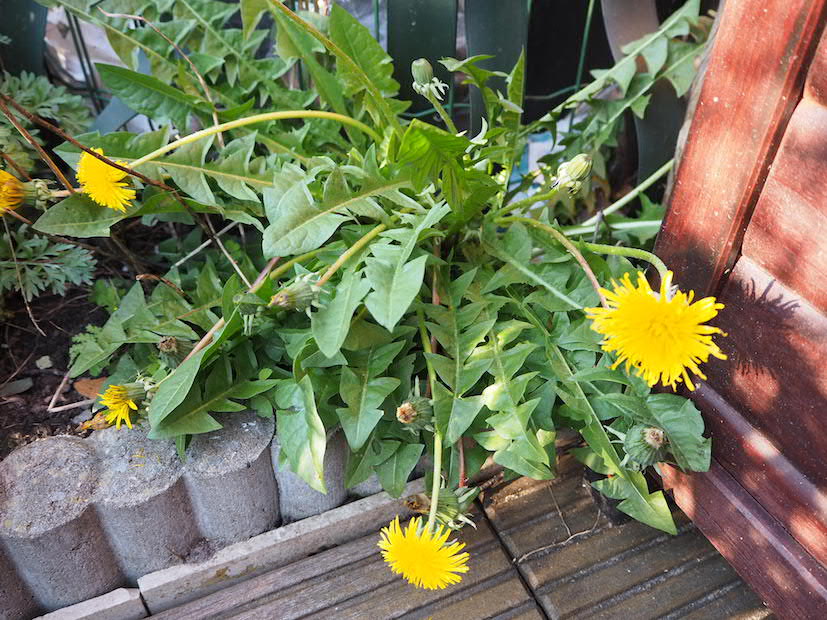 I do hope the previous post convinced you that what we tend to call weeds are in fact valuable teachers and healers. One of the things they can teach us, in particular, is a sense of humility regarding our place as human beings in the ecosystem of this planet.

Today’s journey is brought to you by Dandelion. She has a story to tell. But before we get there, let us take a moment to get to know this wonderful plant a bit better. For that reason I invite you to join me in this visualization…

Close your eyes and take a moment to relax. Then open your inner eyes… You find yourself in a meadow. Feel how this is your home. You are dandelion. Sense how your leaves are dancing in the wind, and enjoy the encounter with the bee that is attracted to your flowers. You feel at peace, knowing that you are an integral and valuable part of this landscape. Take a moment to fully savour this sense of belonging.

Then, you feel the earth below you beginning to rumble, almost like an earthquake. What you cannot see but somehow sense, is that this is one of the cows living on this meadow and searching for food. And then, suddenly, you are no more, as your leaves are eaten by the cow. Time to begin a new journey…. How does it make you feel?

As we discussed before, serving as dying is an essential part of life. For without it, life would not be possible. This is one of the main lessons thought to me by dandelion, when it whispered this tale to me:

I would like to tell you a story about how the world came to be. If you wish, you can see it as a myth, a story of long ago, but it is also, very much a story of the life of each of you. For history is not something that is linear, but rather is a landscape and a weather system that has the ability to reach and transform those who listen and dare to question their preformed notions and ideas.

The first day after the world had been created, those spirits present within it realized that they had a big problem. There were too many of them, and there was no room for anything new to happen. And so they held a meeting. It was decided that they would take turns in visiting the world.

And so a spirit was created that promised to act as a gateway between here and there. She promised to keep the balance and to make sure that every spirit would be given an equal chance in this adventure they had decided to call life. That was how death was born. She was born from an act of love. From the decision of all creatures that the life of everyone of them mattered equally, and that they should not be greedy and think only of their own needs.

At first, that seemed to solve the problem. Spirits came and went, stayed for a while, and then, when their time had come, departed to make room for others.

That was before the storm happened. The storm was a big cloud that had just arrived into existence a few days earlier. It loved what it saw. In fact, it loved it so much that it decided to break the rules and to stay anyway, even after her time had passed. And so it did. It ignored all summons, and continued to hang in the sky. And by doing that, it made the other clouds decide to do the same. For why would they have any less right to stay on? Why couldn’t they have some more fun as well? And as the deck of clouds grew, darkness began to fall on the surface of the earth. For the clouds had now become so numerous that they were blocking out the sun. And it became dark. Very dark. And as a consequence, spirits began to depart even though their allotted time was not over yet. They did not like to be in this unwelcome atmosphere of greed and selfishness where a few could monopolize the sky and keep the warmth and light of the sun for themselves alone.

And so it happened that at some point there was nobody left but the clouds. And they at first did not mind. For they had the sun, and life was good. But then the smells of damp and decay began to reach them from the earth surface. There was no longer anyone there to look after the land, and so the land itself began to die.

It was then that the clouds began to realize their mistake. And they began looking for a way to make things right again. And the solution came quickly: what the land needed was one that could feed it and protect it, even in times of difficulty and darkness. And so the clouds offered to become these guardians. They offered to give their own bodies so that life force could be renewed. That is when rain fell on earth for the first time.

And the balance was restored. And all realized that this was a good thing, and the clouds began to be appreciated. They were even allowed to sometimes have their moment of private fun with the sun. But always there was the agreement that they had to be prepared to offer themselves to the land in return for that. And so they did. And that is how the romance between the earth and the clouds first started. And how the current world was born. Because a past mistake was set right.

And so remember from this that you are allowed to make mistakes. You are allowed to need time to understand what your place in the grand scheme of things is. What you should not do, however, is remain foolish forever.

You may wonder why I choose to tell you this story. In which case I ask you to take a moment to reflect on humanity and the way it is treating the earth at this time in history. Do you recognize how much you are like the clouds?

You are here on this planet because you belong here. We all welcome you. But we ask you to remember that you are born from its love for the sky, and to be children of that live, and to live your life in that spirit. What is it that you have to offer? How can you be of service? There are so many ways you could positively contribute….

Beith is a druid who likes to wander through the forest, inviting the trees to be her teachers in life. She also runs a personal blog about her druid journey, that can be found at wandering-the-woods.com. In real life she’s a mathematician, trying to walk the boundary between the rational and the irrational.

Your comments are welcome Cancel reply

This site uses Akismet to reduce spam. Learn how your comment data is processed.